Top Seed > Blog > Uncategorized > What is Thatch and how do I remove it?

What is Thatch and how do I remove it? 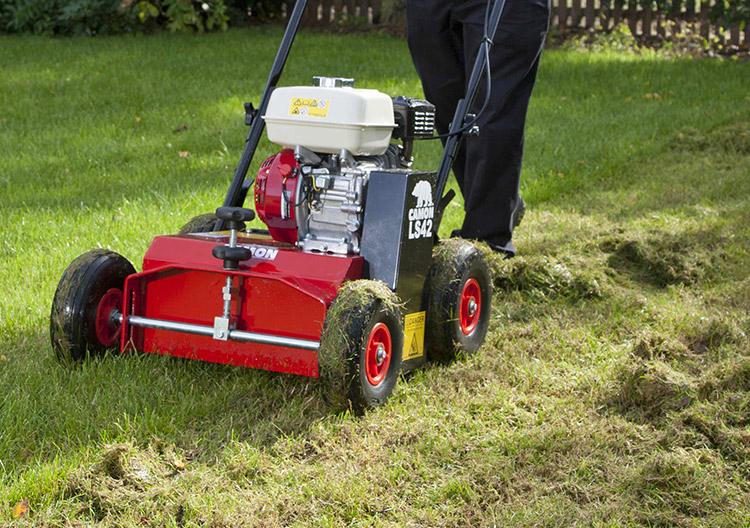 Most turfgrasses are perennial plants which are always in a continuous stage of renewal. As old plants die and new grow, there will be an accumulation of organic matter which builds up in the soil.

Ideally, there should be a balance between the rate at which organic matter is produced and decomposed, generally in most situations, there is too much dead and non decayed material which has a detrimental effect on the lawn. Organic matter has value. It contains various plant nutrients which, after decomposition by microorganisms, is returned to the soil for future use by new turf grass plants.

So what is thatch?

When organic material is produced faster than can be decomposed, the turf develops an excessive amount of thatch. Thatch primarily consists of partially decomposed and some living stem and root tissue that develop in the organic layer between the base of the turf grass plant and the true soil. Stem, crown and root tissues are high in a cell wall material called lignin that is very slow to decompose. Leaves cut off in mowing are rapidly decomposed by bacteria and fungi and do not contribute to thatch. A certain amount of thatch is desirable, because it forms a cushion that increases wear tolerance in turf. When thatch accumulations go above 12mm (1/2”) however, problems usually then develop. Problems such as poor root growth, greatly reduced water movement into the soil which all lead to a lack lustre lawn. Disease and pests are also associated with heavy thatch layers.

There are many reasons for thatch build up in lawns. Improper use of water can encourage thatch development. Heavy use of chemicals is also another reason. The biggest contribution however is the excessive use of soluble nitrogen fertilisers. Nitrogen when applied too often stimulates the grass plant with high vegetative growth rates, which in turn add plant residues to the system faster than the microbes can decompose, as a result, thatch accumulates.

A turf that has too much thatch is spongy under foot. When mowing there is a tendency for the mower to scalp areas as the machine will ‘sink’ into the turf. To estimate the depth of the thatch, use a knife or spade to take a section of the turf out, making sure that the cut goes through the thatch layer and into the soil. If the layer is more than 12mm (1/2”), then the lawn will require dethatching.

The best way to remove thatch is to use a mechanical scarifier. Set the tines on the machine so they penetrate the thatch layer to just above the soil. If the thatch is really deep, it would be wise to undertake more than one scarification, better to remove little at a time than all at once. On the golf course, course managers will verticut their greens weekly so that thatch never has a chance to build up. Applying a sand based topdressing will also help in loosening the thatch.

Mark is our resident grass seed expert with over 40 years experience in the turf care industry.

What is Thatch and how do I remove it?

Browse Our Range of Grass Seed

Whether you are looking for high quality grass seed for a private estate, horse paddock, professional sports field or just a garden, Top Seed have to right seed for you!

"I've worked with Top Seed for six years and I have found that if they can't get hold of a product, it's not generally not worth having! They're reliable, friendly and are always competitive on pricing."

"As the Head Groundsman, choosing the right company with the best turfcare products is vital in the pursuit of success; this is why we will continue to depend on Top Seed's expertise."

"I have been tending the square at my cricket club for 20 years, during which time Top Seed has been my only supplier of every product I have ever needed. Not only do the products tick every box, Top Seed are extremely knowledgeable and I have benefited highly from our interactions and their professional advice during the years we have worked together.
I cannot recommend them more highly."

"In an environment where we strive to maintain our club to the highest possible standards, I find Top Seeds' products and advice crucial to our operation. Their friendly manner makes them very approachable about any issue I may have. If you are seeking top quality service, get in touch with Top Seed. You won't regret it!"

"Top Seed's technical knowledge second to none. In a very competitive market, they provide extremely good value. Orders are delivered promptly too. Especially as we often need supplies at very short notice. I recommend them wholeheartedly."

Sign up to the Top Seed of newsletters! Find out about all of the best deals and some first class tips and tricks for keeping your grass looking at its optimum level.